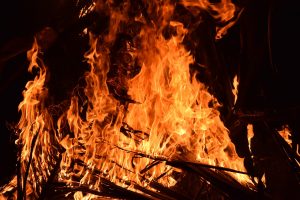 When my thoughts are singed with worry, worry, worry, one way I snap out of it is to sidle right next to the thing that has me anxious.  Some people say to make friends with your demons.  I’m not one of them. But I do want to explore the things that scare me. I want to know just where to throw the bucket of water and who to call for help when I hear fire-y bullshit coming at me.  I’ve been hearing a lot about witch hunts lately and it scares me.  It’s typical dangerous, bullying behavior for the villian to call himself the victim.

And it works.  You want someone out of your hair?  Afraid you are about to get caught doing something unspeakable?  Go for it.  Accuse somebody of the vilest part of yourself.  That’s really what witch hunts are about.  It’s about stealing power by torching someone’s life until it is unrecognizable.  Flatten them with accusations and take the pressure off.

I was burned to the point of being unrecognizable, even to myself, so I’ve thought a lot about accusations, big and small, and the lasting affect they have.  Being falsely accused of something is always uncomfortable, whether it’s a small thing, like a boss vaguely accusing you of being a slacker, to an aunt telling your cousins that you are a bad father, to being jailed for a crime you didn’t commit.  Shame spreads like smoke and gets everyone coughing and unable to speak or see clearly.

Writing helps clear the air in the aftermath.

But what if there was less aftermath?

I’m watching the Me, too movement with wonder, pride, and more than a little fear.  It is miraculous that women are finally being believed about our years of being sexually harassed and abused.   But somewhere, there is some poor schmuck whose life just went up in smoke, because someone falsely accused him or her of a sexual crime.  And because the accusation itself is so oily with shame, that person will feel compelled to hide what happened to her or him.

When are we going to start talking about that?